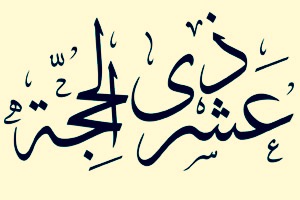 Ten Points for the First Ten Days of Dhul-Hijjah

2. It is permissible to fast the first nine days of Dhul-Hijjah with the last day being the day of Arafah for those not doing Hajj. The Prophet صلى الله عليه وسلم said in a hadith narrated by ibn Abbas رضي الله عنهما (in at-Tirimidhi): “There are not any days that good deeds are more beloved to Allah than those done in these ten days.”

3. In these days, it is recommended that there is a lot of remembrance of Allah سبحان و تعالى – this is for all of the ten days.

4. In these days, it is recommended that one makes takbir of Allah (saying Allahu akbar) – this is for all of the ten days.

5. In these days, it is recommended to read the Qur’an as much as possible and give charity – this is for all of the ten days.

6. The ninth day is the day of Arafah. The Messenger of Allah صلى الله عليه  وسلم said in an authentic narration: “Verily on the day of Arafah there is expiation of sins for the year before and the year after” (narrated by Abi Qatada رضي الله عنه, reported in Sahih Muslim and At-Tirmidhi). So therefore it is a great day, so it is recommended to fast that day for those not doing Hajj. Fasting is only permissible for the first nine days as the tenth day is the day of Eid.

8. Whoever wishes to slaughter in these days it is not allowed to cut or remove any hair from his body or his nails, but this does not apply to his family, only the head of the family who is doing the slaughtering.

9. The ruling regards to slaughtering:

a. An individual who slaughters from his own wealth on behalf of himself and his family – It is not permissible for this individual to shave any hair from his body, remove any part of his skin or cut his nails.

b. An individual who slaughters from his own wealth for others e.g. he wishes to slaughter for his father or his mother – He too must not cut his hair, take from his skin or cut his nails.

c. Anybody who wishes to slaughter with someone else’s wealth, for somebody else .e.g. He has been entrusted by someone else to slaughter cattle for him – This individual is allowed to cut his hair, nails and skin etc.

10. Eid Al-Adha is four days in total: the tenth (the day of Eid prayer) and the days of tashreeq (the eleventh, twelve and thirteenth days of Dhul-Hijjah). It is impermissible to fast in these days for those not performing the Hajj. The Messenger of Allah صلى الله عليه وسلم said: “The days of Tashreeq are days for eating, drinking and remembering Allah عز وجل” (narrated by Abi al-Maleeh رضي الله عنه, reported in Sahih Al-Muslim). Allah سبحان وتعالى said: “And remember Allah during the appointed Days.” (Surah Al-Baqarah: 203).

Taken from the works of Al-Imam Al-Baghawee, Al-Alaamah bin Baz and Al-Alaamah Ibn Uthaymeen, may Allah have mercy on them all and all the scholars of the Sunnah.